A while back, after the launch of Unity 5 I've been seduced to switch the project to the new shiny version of the game engine. Read all here
We would like to hear your opinion about the game. Please take a moment and send us your thoughts here

Sara Donhildi Adventures is a classic action RPG much like the Gothic series and The Elders Scrolls: Morrowind but not a copy or a remake of them. Since then, many things have changed, we played many games, but very few have come close to the quality and immersion of those first moments. I dare to think that Sara Donhildi Adventures could combine Gothic design complexity level with the freedom of movement and the joy of exploring in Morrowind.

But all this will happen when the game is completed. A role playing game is a complex beast, with many systems: combat (melee, ranged and magic), inventory, quests, NPCs, crafting (my favorite) and above all we decided to make authentication and save online. At least from this point of view will be very different from the games mentioned. You can guess the reasons yourself: piracy and the ability to change the game at runtime without downloading it again.

With this in mind, we will initially develop a series of four or five episodes, which we call adventures, whose purpose is to progressively advance the main game code and art.

Back in the times when magic was part of our existence, in a land far far away, the dreadful Lords of Evil planned to subdue the entire world. A young girl fled when the darkness engulfed her village and started a life of adventure. She had no idea how big the world was, only knew the peaceful village she grew up in, and now she discovered a world of wonders, a world so diverse, she never have imagined it.

While travelling through the land she finds the darkness has corrupted the heart of many people, men and women alike. Greed, intolerance and hate has spread far further than the darkness that devoured her village. Her world is in agony and at the brink of falling completely into the eternal darkness.

The darkness is like a disease. Where there was once a happy city there is now a island of darkness and in some places whole kingdoms succumbed to the evil. Living has become a hell and people scattered to the four winds. Fields are full of weeds, mines are abandoned, trading routes closed because of robberies. Those who can save the world are too busy fighting for a piece of bread and those who have enough too scared they'll be robbed or killed by the rest. The world slowly slips into the darkness, one soul at the time.

During the first adventures Sara Donhildi is going to discover how badly the darkness has corrupted the heart of the people. Her task... err... actually she doesn't have a task. The world doesn't care if someone is going to defeat the evil ones. The gods are annoyingly silent and only give blessings after generous offerings. There is no prophecy and no one had visions about a saviour. I'm afraid you are on your own, kiddo.

Aside from the usual suspects, Sara have to fight with this indifference. Wolves, bears, skeletons, brigands and assassins are nothing compared with making people care about each other. It's a hard a task an rarely rewarded by those involved, but choosing this path will lead to great achievements and rewards.

The world is big and here for you to explore. Nothing is set in stone, nothing is predetermined, there is just a big canvas for you and me to paint on. 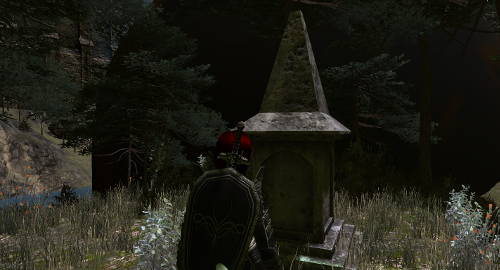 First Adventure - The Curse of the Skeleton King

There was once a king who reigned from his fortress in the mountains. The king was neither good or bad, just an average ruler who wouldn't have made any mark on the history. People didn't hate him or love him too much. He fell in love with a beautiful woman in the village. He secretly sent her flowers and small gifts. One of the gifts was an amulet which would protect the wearer from diseases and sometimes at night it would shine like a star. An outbreak of flu afflicted the whole village, but the women was protected by the amulet. The villagers became suspicious and said the disease was her fault and in an angry moment they burnt her as evil witch. Beset by grief the king tried to avenge his beloved, but the villagers paid a wizard to protect their village with a magical barrier.

He captured the wizard and asked him to remove the barrier he created, but the wizard couldn't do that, unless the villagers wanted him to. The king forced the wizard to modify the magical shield, so the villagers couldn't escape. The wizard, fearing his life, imprisoned the villagers, though he also took the village out of the current flow of time. As the years passed the king grew old but not weak, his frightful oath preserved his powers and when the time came to leave this world he turned into a living skeleton. He couldn't stand the shine of the day, so he buried himself in a cave near the village. His faithful men followed him and they start to reign the land by terror.