We would like to hear your opinion about the game. Please take a moment and send us your thoughts here

A while back, after the launch of Unity 5 I've been seduced to switch the project to the new shiny version of the game engine. I knew there will be problems, heck there are problems when installing a new minor version of unity all the time, with scripts written in javascript and not using #pragma strict, with namespace collision and so on.
But the worst are those who reveals themselves at play time. While red errors in console prevent you to launch the game, they have the solution and you can fix it, errors that show in player are far more challenging. First of all you need to understand what is happening and be able to describe it accurately. It is of no use to search for rendering problem in Unity while the shaders from assets were crafted with 4.x in mind and don't work anymore.
I had such a problem with trees from a package bought before, they shown a white border around the leafs.
Searching the Internet revealed a lot of people having the same issue, offering various solutions, none satisfactory. One guys says, disabling the Receive shadows on the mesh renderer fix the problem for him. Tried, didn't worked for me. Another one said it modified the camera background color to black, also didn't helped. I decided after a while, to wait untill the author of the assets update the packages to 5.x version and focused on another pressing issues. 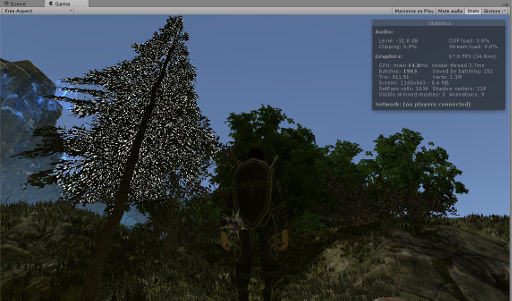 Many months later, the author only updated one assets from 3 i had bought from him and there was no ETA for the rest of them. So I decided to investigate the problem in depth and see if I can fix the problem without needing to write shaders myself. I have 2 problematic packages the Medieval Environment and Medieval Village. They have a lot of assets, so I changed only those I had use in main scene for now. It was easy for the buildings and small items (benches, barrels, tables, boxes etc.), just replaced the legacy shaders with standard shader and everything fall in place nicely. Piece of cake.
Not so easy though with the trees. All the trees were created with Unity Tree Creator and optimized for 4.x. Luckily I found an easy fix for them too. Just changing shader to the one recommended by Unity fixed all the problems: 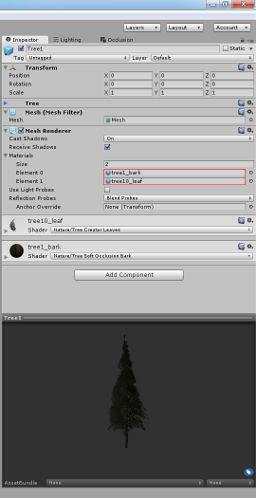 It is a tedious job to change 22 trees, but in the end everything was fixed and the trees in terrain worked correctly. The alternative was to replace them with speedtrees which look far better than unity trees on terrain and they don't show any difference when switching LODs or switching to sprites in distance. There are though 2 main issues with speedtree: they are more high poly than the old ones and they are far more expensive. At an average price of $39 (which is even higher if you live in EU, 43.2 Euros due to the fcking vat) it will mean to spend 1k Euro just for trees. While I strive for a better looking, I am not in the position to spend that much money for trees only. I found that mixing a few speedtrees with the old ones, will enrich the scene and provide a good amount of variety to make it a believable environment.